At the intersection of Lillian Way and Eleanor Avenue in Los Angeles, California, there once stood a studio used by Charlie Chaplin to create 12 of his finest short films, and by Buster Keaton to produce all 19 of his silent shorts and his 10 silent feature films. In 1988, a plaque was placed to mark the location of this hallowed Hollywood ground. But it has a few problems. Firstly it doesn’t actually mark this location; it was placed, unbelievably, on the wrong corner. It also makes no mention of Chaplin at all. And finally, after years of foot traffic, the poorly made plaque can barely be read.

It’s time to change all that. The International Buster Keaton Society, with the support of the Chaplin Office, has designed a new plaque to properly honor these giants of cinema. They have been working for two years with the city of Los Angeles, and have gotten final approval for this project. They also have a plaque maker ready to go. All they need now is the funding. And that’s where you come in. Go to the Keaton 100 website to help be part of history. Thank you. 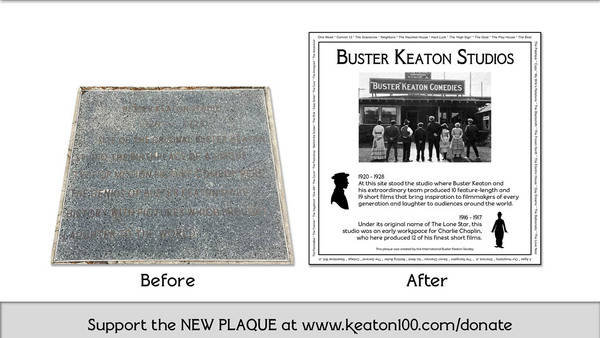