Celebrating 100 Years of THE KID

THE KID had its world premiere one hundred years ago today, on January 21, 1921 at Carnegie Hall in New York City in a pre-public subscription showing as part of a benefit for the Children’s Fund of the National Board of Review of Motion Pictures. A milestone in his artistry, THE KID was Charles Chaplin’s first full-length film as a director and his most ambitious production to date.

Chaplin created something completely new with THE KID. Films were either dramas, or comedies – but here, as in life, the two were combined in the most natural seeming way. Chaplin wrote in his autobiography that “there had been satire, farce, realism, naturalism, melodrama and fantasy, but raw slapstick and sentiment, the premise of THE KID, was something of an innovation.” He recalled being told by an industry professional, “It won’t work. The form must be pure, either slapstick or drama; you cannot mix them, otherwise one element of your story will fail.” But Chaplin followed his intuition, the film was an instant success, and the cinema industry never looked back.

In February 1921, the Morning Telegraph noted that “THE KID will live when other pictures have died. Its pathos is universal in its appeal. Its humor is classic. Chaplin is a humanitarian. He understands the hearts of the irresponsible, the children and the willing failures of the world. The joys of THE KID cannot be catalogued, they must be seen.”

THE KID is still a hit with audiences 100 years on. It is no surprise that the honorary Academy Award presented to Chaplin in 1972 was for the incalculable effect he had had in making motion pictures the art form of the 20th century. In 2011, THE KID was selected for preservation in the United States National Film Registry by the Library of Congress as being “culturally, historically, or aesthetically significant.”

You can learn more on THE KID section of our website, watch some classic clips on our Youtube channel and listen to the soundtrack on Spotify. 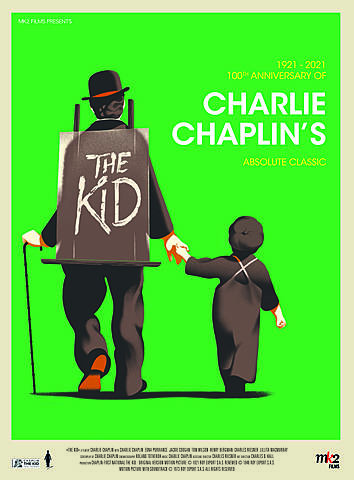